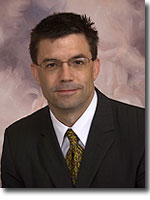 Dr. Michael J Finger is a board certified Urologist practicing in Harlingen Texas. Prior to this he served as Staff Urologist at Urology Associates of South Texas, and Chief of the Department of Surgery at Dewitt Army Community Hospital in Belvoir, Virginia.

Dr. Finger Interned at Tripler Army Medical Center, Honolulu, Hawaii. He completed his General Surgery residency and his residency in Urology at Walter Reed Army Medical Center from 1991 through 1996. He achieved the rank of Colonel before retiring from the U.S. army after 20 years of service.

Our patient registration forms are now provided as a downloadable .pdf document for your convenience.

Please download and print the .pdf document so you can save time by filling out the forms prior to your office visit.